Most families have holiday traditions, enjoyed to a greater or lesser degree depending on the people and paraphernalia involved. These can develop unintentionally. For example one friend’s father-in-law-in-law (meaning he’s her son’s connection, not her own) has established a practice of spending the entire day bad-mouthing and swearing over national Democratic politics. Hardly conducive to pleasant conversations, let alone good will. My father’s was to give my mother a pair of flannel pajamas. Hardly romantic.

Whatever yours includes–midnight church service, caroling, roast beef for dinner instead of turkey, opening one gift on Christmas Eve, decorating with ugly candles passed along from grandmother–the list goes on endlessly. You can get sabotaged by rituals if you allow them to become dictates. One friend was so turned off by her partner’s insistence on perfect decorations that she gave up all holiday signs after she lost him.

For years my family’s tradition was tootling on kazoos. I can’t say enough good things about kazoos. Anyone could play one almost immediately. Even my tone-deaf husband joined in with no embarrassment. Laughter abounded, overflowed, and made our stomachs ache.

Seems to me the birth of the practice was the radio or record player booming after the holiday dinner, and guests began humming and singing along. Lacking a piano, organ, or guitars, I longed for some method to increase our volume and coordinate the melody. I can’t recall why I had a stock of several dozens of kazoos many Decembers ago, but I pulled them out and distributed to anyone who’d take one. The music from electrical equipment quickly became overpowered by the strength of the live performers in my living room.

Easy to play were the oldies “Jingle Bells” and “We Wish You a Merry Christmas.” However, we quickly mastered playing parts and playing in rounds. I don’t know how we had the breath to keep the concert going. We seemed to break down in hysterical laughter as much as we made music. Each person tried to toot louder or more dramatically than his neighbor.

“If you can hum, you can play” is the advice of kazoo aficionados to novices. The mistake of most newcomers is to blow like you would a trumpet, but the player’s voice needs to vibrate in order to make the membrane inside the kazoo, which amplifies the notes, quiver. This membrane can tear or stretch, but if you’re as dedicated as I am, you’ll learn you can replace it with tissue paper or even plastic wrap cut to the correct size. YouTube has videos that offer instruction if you’re a rule klutz.

The highlight of our holiday performances? Nothing can match the musical thrill of the “Hallelujah Chorus” from Handel’s Messiah played in parts on a dozen kazoos. It beats a production from the Mormon Tabernacle Choir because you and your family and friends are playing it. Those who prefer can sing the tune in parts of harmony.

Kazoos appeared on the American scene in the mid- to late-1800s. However, they’re related to a number of membranophones, instruments that modify the player’s voice through vibrations. They have waxed and waned in popularity and still sell in the millions. I personally prefer the timbre of the traditional metal variety, but plastic versions appear in most toy stores.

Prepare yourself for the holidays. But if you miss your opportunity, don’t wait until next year. National Kazoo Day is January 28. The perfect time for you to become active in politics as well as music. You can join the continuing campaign to have the kazoo declared the USA’s national instrument, a well deserved honor because it’s certainly the most democratic 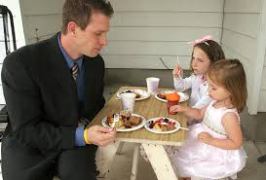 With the holidays hard upon us, I have to ask an important question: do kids’ tables still exist during festive occasions? In my childhood, they did. Of course with eight or ten kids at the party, parents found it much easier to isolate all of us at one central location rather than sprinkle us among the adults where we’d outnumber and outmaneuver them.

I believe I continued the tradition with my own family. I’d blame the small size of our early apartments rather than any conscious decision. We had to break into mini-groups. However in gatherings with my husband’s extended—and extended, and extended—family, the issue rarely surfaces. Every party is a buffet, and people hunker down wherever they can find a square foot.

Fast forward to the third generation. My sister tried to have a kids’ table several times. This has fallen by the wayside, perhaps because we both have opinionated, stubborn children who refuse to take orders, such as “Sit at the kids’ table.”

The grownups’ table used to represent status, a step forward from childhood to adult. I looked forward to my own transition. I remember one of my last Christmas family dinners with my aunt and uncle. My aunt broached the subject of seating oh-so-delicately . I believe I was about 16 or 17. She phrased her request so deftly, I thought she was telling me I’d be at the adults’ table. I believe she mentioned my increasing age and ability to take responsibility. You guessed it! This translated into yet another year at the kids’ table, ostensibly as the leader. I was not fooled.

Now people give good reasons for phasing out the kids’ tables, other than wanting more control over their offspring. Parents cite family togetherness, setting a good example about manners and conversation, encouraging intergenerational cross-fertilization of ideas. Regardless, in my corner of the world, fewer folks set up these enclaves. The one exception seems to be wedding parties. Maybe the per-person cost for meals is so extravagant, even parents aren’t willing to see good food thrown out in heaps.

I’m not enamored of kids’ tables. I can take ‘em or leave ‘em. I know sometimes children’s conversations and insights are hysterical and fascinating. In other instances, they are whiney, rude beyond words, and annoying. I have about a fifty-fifty chance of preferring any given adult table over kids’. I’m fortunate because I can exercise choice in the matter. Now that I’m legally of age (three times over) I could automatically be eligible for adults’. However, with my height, less than five-feet, I’m shorter than many preteens, so I still qualify to sit at any kids’ table in view.

With the approach of the year’s end and a new one beginning, many of us frantically compile lists of things to finish up or initiate. Mine include holiday gift-buying, card-sending, planning a family dinner, household chores to complete before the arrival of guests, places to go and people to meet, not to mention activities related to writing and marketing. It’s enough to make me long to immediately take a nap. Or, if I actually try to accomplish everything, by Christmas Eve at 2 a.m., I’m cranky, exhausted, and depleted of cheer.

However, a secret has been revealed to me, through my own neglect. If you wait long enough, many of those little notes to yourself are out of date and you can throw them away! This won’t work with responsibilities like filing your taxes, although you can even delay on that particular task from year to year. This is known as “procrastination.”

This certainly alleviates some of the stress we place on ourselves to achieve each and every item on our to-do lists. Example: I’ve had a stack of bricks in my backyard for about a year, pried out by a landscaper from where they’d slowly been inundated by mud. On my list went “move bricks” for quite some time. Never to be accomplished. Until my grandkids wanted some chores for which they could earn money. Presto! They did the work, and I crossed it off the list.

Another advantage: you’re able to ponder an action from multiple perspectives, gain the advice of others, maybe even outlast a trend. When I had a house I wanted to refinance, I delayed and delayed. Over the years, the interest rate plunged steadily downward to my benefit.

In terms of social interactions, I recently postponed for weeks contacting some friends I hadn’t see in a while. Finally, they reached out to me with invitations to their homes. What a great way to keep in touch without having to put forth effort or adding another bunch of chores to be completed.

Physical chores are especially suitable for procrastination, since I don’t enjoy doing them. Perhaps you, like me, have put off making a bed. By night time, it’s no longer needed. Ditto swiping out kitchen cupboards with any sort of regularity

This holiday season, try a little procrastination yourself. You may find you’re happier, and so are the folks around you.